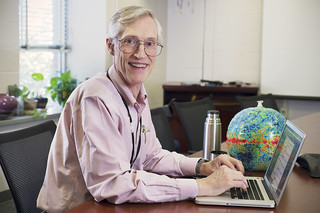 These are the answers Dr. John Mather (Nobel Laureate and James Webb Space Telescope project scientist) gave to questions asked on Twitter during our second Tweet Chat. The answers are very succint due to Twitter's 140 character limit (and we also added the #JWSTscience hashtag to each answer). Often the questions are rephrased in the answers so that our Twitter followers would know what we were giving the answer to.

How will data from JWST compliment data from the Mars Rover? Any collaboration in those projects? (asked by @ubeenfranked)

We're eager to see how life might possibly exist on Mars. #JWST will look for exoplanet oceans.

MY ONLY QUESTION ABOUT #JWSTscience IS: WHY ISN'T THE TELESCOPE UP THERE YET!!! (asked by @omnologos)

It is a very ambitious project and it takes a long time to put it together and test it.

Could Webb potentially detect the spectral signature of a cluster of metal-free Pop. III stars? (asked by @carmenfragapane)

Yes, are specially set up to see the spectral signature of clusters of metal-free Pop III stars with NIRSpec.

Was origami a big influence in the folding designs that will be implemented to deploy #JWST? (asked by @PyrrhonianSC)

No, origami wasn't an influence, but we did make a list of 50 possible ways to fold the telescope.

What big questions are you hoping to answer with data from the JWST? (asked by @pradeesh)

What big questions are we hoping to answer with #JWSTscience? How did we get here? Are we alone?

Is it true that every galaxy has its own black hole in the center, wich [sic] gives the galaxy theyr [sic] impulsion? (asked by @mejis117)

Most galaxies have a black hole in the center; we don't know how they got there. We hope to learn more with #JWSTscience.

Have any specific pictures/missions been planned yet? Any ideas on first target? Second? (asked by @ZachInFlight)

First targets? We haven't decided, but we'll start with the easy ones! (Nearby objects.)

How far back in time can #JWST see? (asked by @PhilipPascarell)

How far back will #JWST see? We can see the first objects that formed 200 millions years after the Big Bang.

Will the telescope give us completely new information or do you have a clue as to what results it may bring? (asked by @PowerOfFriends)

#JWST will see things we've never seen before because it is so much more powerful than anything else.

When do you hope to get your first 'better than Hubble' image? ie how long after launch? (asked by @astro_den)

#JWST will take 2 months to cool down & 4 months to set up post-launch, before taking scientific data.

Will you be able to observe GRB low energy afterglows in the infrared?

Yes, we can observe GRB low energy afterglows in infrared. #JWST is powerful for studying the early universe.

Dr. Mather, do you think dark energy is the cosmological constant & how can JWST help to answer this question? (asked by @raphaelperrino)

Yes. #JWST will measure the time dependence of the dark energy to see if it matches the cosmological constant.

As I understand it Hubble is a repurposed Keyhole. How will the technology of the new telescope improve Earth observation? (asked by @guyworld)

Larger telescopes give sharper images. We won't look at Earth but others can use similar tech to get better imagery.

Dr. Mather, do you think there is any chance of the JWST seeing evidence of intelligent life? #JWSTScience (asked by @ubeenfranked)

There is always the chance to detect intelligent life with #JWSTscience, but it would be a extremely huge surprise.

Could James webb telescope find new planets in the solar system or new stars nearby the sun? (asked by @NimetEsra)

#JWST will find many new asteroids, Kuiper Belt Objects, and dwarf planets in our solar system.

Will jwst observe earth near objects like jupiters moon europa? (asked by @mejis117)

Yes, #JWST can look at objects in the solar system from Mars outwards.

What's the best way to get young students more excited about studying science, and to improve school science programs? (asked by @ubeenfranked)

Young students are curious about everything! Hands on discovery of things around us is the beginning of science.

Ever the science geek, I want to know: is your future big brother (sister) on the drawing board already? (asked by @keesengels)

We have wonderful ideas for a century of great telescopes, but the next big space telescope hasn't been chosen.

What's the dimmest magnitude object that Webb can detect? (asked by @Michael_RA)

You can explore what #JWST will see using this exposure time calculator: http://jwstetc.stsci.edu/etc/ #JWST can see the heat signature of a bumblebee at the distance of the Moon.

First images will be available ~6 months post-launch when telescope set-up is complete. Promise they'll be beautiful!

Will @NASAWebb be able to obtain some of the first exoplanet pictures within reasonable range? (asked by @astro_gee)

#JWST will carry coronographs to enable photography of exoplanets near bright stars, but they will be only "dots."

Can we observe the theoretical Oort cloud with James Webb? (asked by @NimetEsra)

Oort Cloud objects are far too faint, even for #JWST, unless we get extremely lucky.

With hurricanes looking like galaxies has scientist come up with the comparisons of the 2? how maybe they both form the same? (asked by @mattster_69)

Hurricanes and galaxies are both organized by a pull towards the center.

Will #JWST be able to characterize the albedo from the dot light of the exoplanets to know more about them? (asked by @astro_gee)

Yes, #JWST will try to get spectral characteristics and colors of exoplanet light.