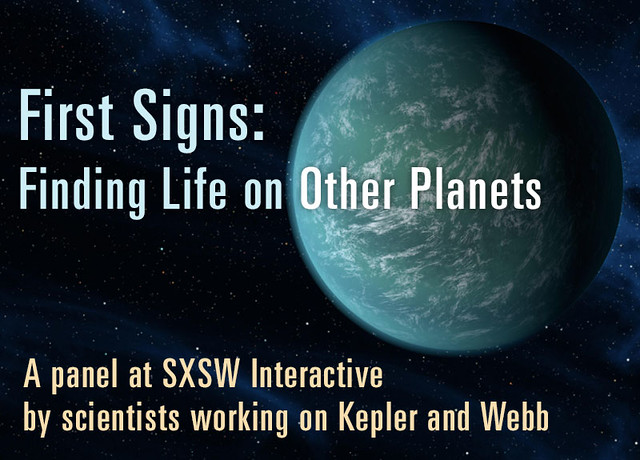 During SXSW 2014, we held a tweet-chat with some of the scientists on the"First Signs: Finding Life on Other Planets" panel. Below are a selection of the questions we answered.

The answers are very succint due to Twitter's 140 character limit (and we also added the #FirstSigns hashtag to each answer). Often the questions are rephrased in the answers so that our Twitter followers would know what we were giving the answer to.

Of all the Exoplanets discovered, which is the most earth like? (tierrauniversu)

I think Kepler-62f is the most earth-like to date. 40% larger, middle of HZ. pic.twitter.com/zxGuYeYLvd (Natalie Batalha)

Will JWST be able to further characterize it and what will be needed to detect if there is life in the exoplanets?(tierrauniversu)

We will find closer HZ [habitable zone] planets for JWST characterization with TESS and maybe K2 http://tinyurl.com/lvcvp8s To find evidence of life with JWST, we'll look for by-products of life (bio-markers) in the atmospheres of planets. (Natalie Batalha)

What is the difference betwn Hubble, Chandra, Kepler? (divine_jit)

Hubble orbits 350 miles, visible light, and is 2.4m. JWST orbits at 1 million miles, sees IR light, and is 6.5m. Kepler is a planet finder, whereas JWST will be *characterizing* atmospheres of planets by analyzing their spectra. (Jason Kalirai)

JWST will see the 1st stars ever to form in the universe and will be able to find water on other planets. (Alberto Conti)

How is the JWST better than spitzer and other infrared space observatories? (yellowkazooie)

JWST has about 50 times the collecting area of Spitzer and the ability to observe at shorter wavelenghth. (Alberto Conti)

Why the heavy focus on the near and mid IR with the science instruments? Why not also target other wavelengths? (alan387)

The next transiting planet finder is already in the works! Check out NASA's TESS mission, to launch in 2017. (Natalie Batalha)

Will we be able to see Europa in any greater detail before a mission there with JWST? (muellerspace)

JWST can observe our Solar System at much higher resolution that previous telescopes, optimized for rocky planets. (Alberto Conti)

Will Hubble take Deep Fields in other directions? JWST? (billhoppery)

Is the Universe rate of expansion the same in all directions from the center of the Universe? (billhoppery)

The universe is expanding in all directions. JWST will help constrain the rate of expansion by studying dark energy. (Alberto Conti)

I would say that it is the Kepler discovery that planets are ubiquitous. http://kepler.nasa.gov  (Jason Kalirai) 715 newly verified exoplanets!! http://tinyurl.com/locspkq (Natalie Batalha) The recent "planet bonanza" from Kepler! http://1.usa.gov/1cKmNEa (Amber Staughn)

How is Kepler's data relayed to earth? (paulmollomo)

Kepler data is transmitted via Ka-band to the DSN using a fixed antenna. http://www.nasa.gov/kepler (Natalie Batalha)

Why the unique design of the JWST as opposed to more traditional telescopes? (michaelfrye10)

JWST is optimized to find the faint glow of infrared light. The tennis-court sized sunshield blocks the Sun on one side. And, here is a website with a description of the JWST sunshield. http://jwst.nasa.gov/sunshield.html  (Jason Kalirai)

How do you calculate the exact orbit the James Webb will end up in, and how difficult will it be to maintain so far out? (laurl0re)

Gravity helps us get there. We use general relativity to calculate the orbit. Once there we can stay for >10 years. (Alberto Conti)

What about the James Webb allows us to see so much further into space than before? (laurl0re)

First, its huge light collecting area. JWST will be 100x more powerful than Hubble and can see things fainter than Hubble. Second, as the Universe expands, light gets stretched from the visible to IR. JWST is IR optimized, so its more sensitive.(Jason Kalirai)

How far away is the closest Earth's twin to the Earth? (nimetesra)

Kepler-62 is about 1200 light-years away. http://en.wikipedia.org/wiki/Kepler-62 NASA's TESS mission will find earth-size planets that are nearby. Launch in 2017! Go TESS! (Natalie Batalha)

Could JWST find unknown brown or red dwarf stars closer to us- a lightyear or 2 away? With possible planets around those stars? (jellysock)

YES, JWST will be very good for finding nearby ultra cool stars, but we would have already seen something 1-2 ly away. (Jason Kalirai)

As the planets are pretty far away, how would we go there and build a settlement? (divine_jit)

We don't yet have the technology to get us there, but the first step is to find the habitable planets! (Amber Straughn)

If the JWST could see visible light and is pointed towards Earth, whats the smallest thing it could see on the surface? (jon889)

At a distance of 1 million miles, a pixel on JWST subtends about 220 meters. (Jason Kalirai) However, JWST will never point back towards Earth (and the Sun!); will always point to deep space. (Amber Straugn)

So will JWST be able to see through the ice/surface on Europa to see more definitively if there is liquid water there? (muellerspace)

As moons are very common in our solar system (especially around the gas giants), is there any hope to find exomoons someday? (astrochemia)

What's the highest priority research for JWST? What is the line like to get telescope time? Full but prioritizing? (ramsayphil)

Like Hubble, JWST telescope time will be competed and peer-review selected. Expect ~10% of the best proposals to get time. (Jason Kalirai)

How many planets are in the Alpha Centauri system and Proxima Centauri? (siscorane)

Don't give up on 22b! She's larger which implies she has a H/He envelope of some sort instead of a rocky surface. (Natalie Batalha)